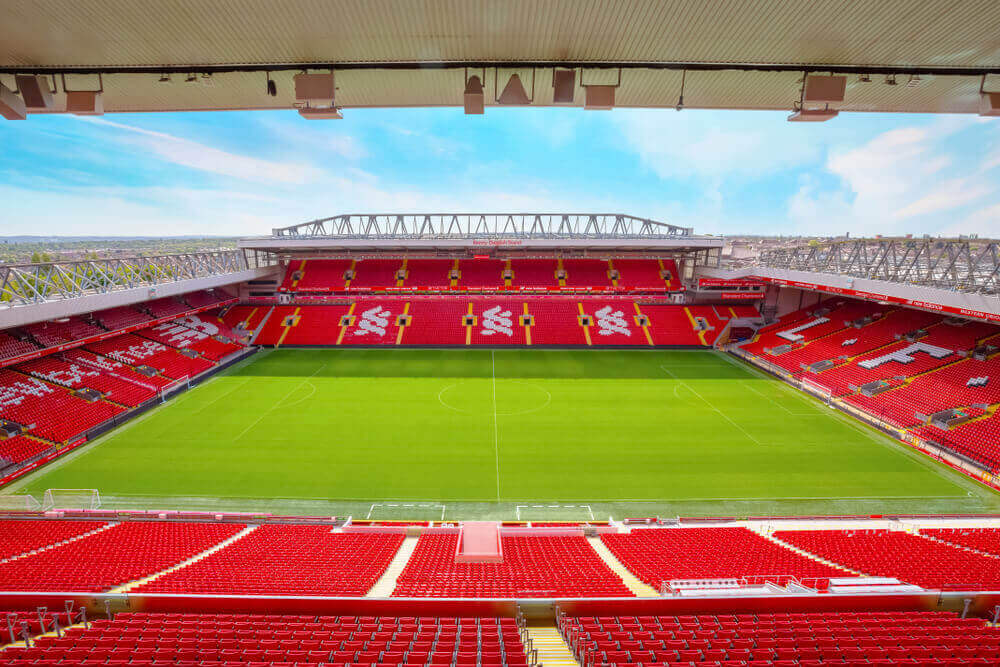 Liverpool FC is one of the iconic teams of the English Premier League. The Anfield-based club has been part of the fabric of English football for the past 130 years, and has been crowned League Champion 19 times, a record surpassed only by Manchester United. Yet it is in Europe that Liverpool has truly excelled. Liverpool’s 14 European trophies, including six European Cups far exceed the achievements of any other English team.

Over the years, Liverpool has featured some genuine greats of the game – both out in the middle and in management and supporting roles. But the good times have been interspersed with periods of under-achievement and even tragedy. The Liverpool FC story is one that contains as many extremes as the city itself, so let’s find out more.

It is well-known that Liverpool has been based at the Anfield ground, in a north-eastern suburb of Liverpool, since the club’s formation in 1892. What is less common knowledge is that prior to this, Anfield was the home of Liverpool’s other famous team, Everton. In fact, it was only after the Everton club committee had a dispute with John Houlding, the owner of Anfield, that Liverpool FC was born.

Everton changed their location to Goodison Park, just a 10 minute walk away, so Houlding formed his own team of players. The club became known as Liverpool FC and so on that day, not only was an iconic team brought into existence, but so was one of football’s great local rivalries.

Liverpool achieved immediate success in the local Lancashire League, thanks in no small part to Houlding’s strategy of scouting the best players in Scotland and signing them up. In fact, for that first season, it was common for all eleven players to have broad Scottish accents. Those who think importing players instead of developing local talent is a modern problem in football that could never have happened in the old days need to think again!

In 1893, Liverpool joined the ranks of the Football League, achieving promotion to the top tier in 1896. The first of those 19 league titles arrived in 1901, and The Reds won again in 1906. Their place among the top teams in English football was well and truly established, and it is something they have never relinquished to this day.

Liverpool is one of the “big six” Premier League teams, and is one of only five that has never been relegated from the top tier since its formation – the other four, incidentally, are Manchester United, Chelsea, Tottenham and Arsenal. Despite a domestic record that most clubs could only dream of, The Reds have never quite been able to emulate the achievements of their other major local rivals, Manchester United on that front. Instead, it is the club’s heroics in Europe that really set Liverpool apart from other teams at England’s top table.

Winning the Football League for the sixth time in 1964 gave Liverpool FC its first ticket to European football, providing qualification for the 1965 European Cup. Their very first game was against Icelandic team Knattspyrnufélag Reykjavíkur, and the Reds won 11-1 on aggregate. It was a foreshadow of things to come and they breezed through to the semi finals before losing out in agonizing style with a 4-3 aggregate defeat at the hands of eventual champions Inter.

Only months later, they reached their first European final in the UEFA Cup Winners’ Cup. This time, they were bested by Borussia Dortmund in extra time, but it seemed certain that Liverpool’s first European silverware was just around the corner.

As it turned out, The Reds had eight more years of coming so close yet so far before finally winning the Europa League in 1973. But once the European silverware started to arrive, it positively rained down on Anfield, with six more titles in the Champions League, Europa League and Super Cup over the subsequent years.

Since the turn of the millennium, Liverpool have added seven more European trophies to the cabinet. Yet it could easily have been more, were it not for a period in which they were excluded from European football between 1984 and 1991. It followed one of the two darkest days in Liverpool FC’s history, and we will talk about those next.

Tragedies that left their mark

Every sports club, indeed any gathering of people that exists for decades, will inevitably experience moments of tragedy over those years. For Liverpool, these can be summed up in two dark days, that were less than four years apart.

The first fell on 29 May 1985, and it was the day of the 1985 European Cup Final. Liverpool were the reigning champions and were warm favourites to defend the title against Juventus. The venue of Heysel Stadium in Belgium had raised concerns prior to the game due to its dilapidated condition. There were also question marks concerning the decision to allocate a neutral section of the stands to local Belgian football fans.

These fears proved to be well-founded. The “neutral zone” rapidly filled with Juventus supporters and long before the kick-off time, the opposing fans, separated only by chicken wire, were literally pulling up chunks of concrete from the dilapidated stands and throwing them at one another across the divide. As the kick-off time approached, a group of Liverpool fans charged the neutral zone and in the resulting melee, spectators surged against a back wall that collapsed, resulting in 39 fatalities and 600 injuries. Incredibly, the game went ahead, as there were fears that calling it off would lead to more violence. However, Juventus’ 1-0 win was a footnote that meant nothing to either team when the full scale of the disaster became clear.

Just four years later, Liverpool FC found itself at the scene of further tragedy. Facing Nottingham Forest in the FA Cup semi-finals at Hillsborough Stadium in Sheffield, inadequate crowd control measures led to hundreds of Liverpool fans being crushed against the perimeter fencing. The footage of players attempting to help fans over the fences and onto the field is as shocking today as it was 30 years ago. The tragedy cost 98 people their lives.

Both these events have left their scars, but it is important to note that some good came from them, too. The tragedies provided a trigger for complete reviews of stadium safety. In particular, the Hillsborough Disaster brought an end to open terraces with “standing room only” and heralded the new era of the all seater stadium.

Whether it is at home in the domestic leagues or out in Europe, Liverpool FC is only the success story that it is thanks to the men out in the middle. Over the years, some genuine legends of the game have been proud to call Anfield their home. It would be impossible to name them all, but let’s just illustrate the point by taking a look at a cross-section of the biggest names from across the years.

These are just a few of the names who have contributed, both in the middle and in other ways, to make Liverpool FC the unique sporting institution that it is today. And with the likes of Salah, Virgil van Dijk and Sadio Mané, the future seems to be in safe hands.

Yet there are so many other great names we could have mentioned. From Billy Liddell in the pre-war years to Fernando Torres in the 2000s, and from Michael Owen up front to Ray Clemence in goal, the list goes on and on.

Liverpool is a team that was born out of adversity, and it is one that has had to triumph over it in various ways over the decades. It has created a spirit and a team ethic that is the envy of other clubs across the Premier League and the world, and it demonstrates that the performance out in the middle is only a small component of what defines a football club.

Dar es Salaam. A gaming firm in the country, SportPesa Tanzania, has signed a three-year…

What will you do with more than 200 million? It’s the kind of question we…

Win Up to 500 times with this Casino game from SportPesa.