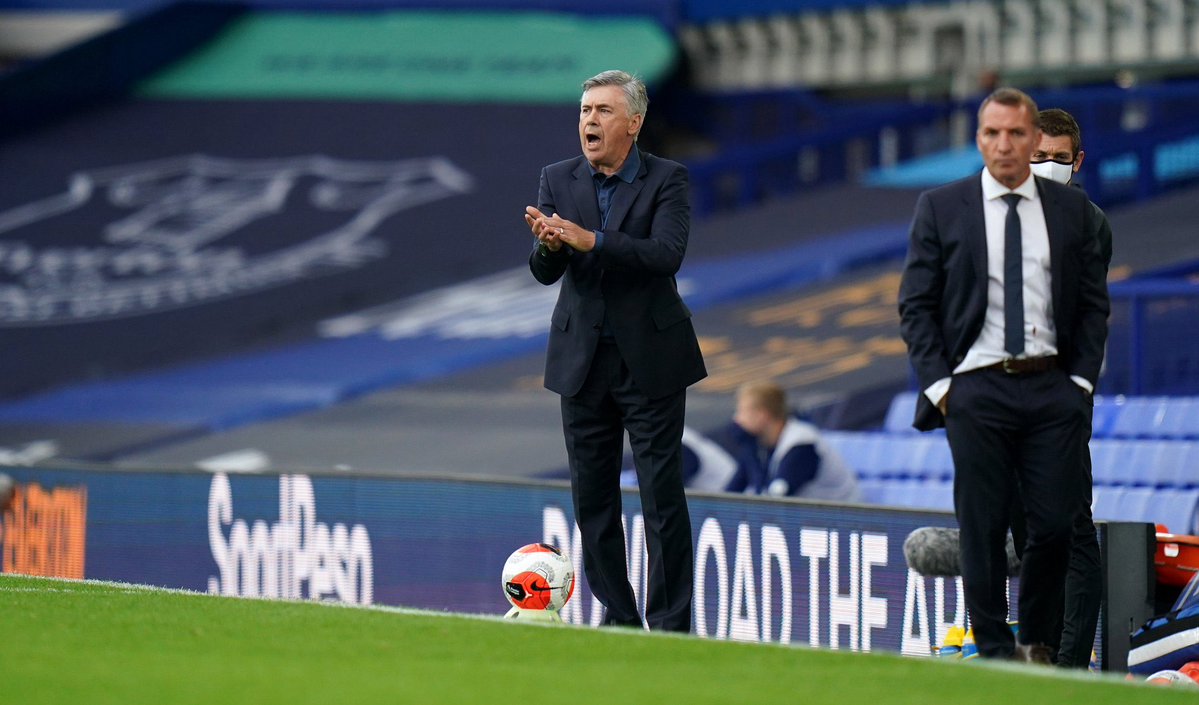 Southampton have only won one of their 20 Premier League trips to Everton, but this evening they will try to break Carlo Ancelotti’s unbeaten record as manager at Goodison Park.

What time does Everton v Southampton kick off?

Kick-off for this evening’s game at Goodison Park is at 18:00 BST.

Is Everton v Southampton on TV?

Today’s game will be shown on Amazon Prime and also broadcast on Twitch.

Theo Walcott, Fabian Delph and Alex Iwobi are all ruled out for the Toffees, whilst Mason Holgate is now doubtful after picking up an injury away at Spurs.

Moussa Djenepo, Jannik Vestergaard, Sofiane Boufal and Yan Valery are all missing for Southampton, but Pierre-Emile Hojbjerg is back in contention.

Southampton’s most recent trip to Goodison Park was a successful one, beating Everton on penalties in the Carabao Cup. However, Saints have just one win in their last 20 Premier League trips to Everton.

Goals from Tom Davies and Richarlison were enough to outscore Southampton’s Danny Ings when Everton won the reverse fixture in November at St. Mary’s.

Managers Carlo Ancelotti and Ralph Hassenhuttl have competed against each other previously in Bundesliga too, with Ancelotti’s Bayern Munich winning 3-0 in Bavaria before winning a 5-4 thriller at RB Leipzig.

Everton are unbeaten in their last nine matches at Goodison Park, but Southampton have won more away games than everyone other than Liverpool, Manchester City and Chelsea in the Premier League this season.

There’s absolutely no doubting the positive impact that Carlo Ancelotti has had at Goodison Park this season. Everton have been incredibly well set up under the Italian, especially at their fabled home, where Ancelotti has won four and drawn three in the Premier League since his arrival.

Southampton have also turned a corner under Ralph Hassenhuttl. The Austrian coach looked incredibly vulnerable in his position when beaten 9-0 at home by Leicester City earlier in the season, but their displays away from St. Mary’s have kept them away from any relegation reckoning. Sunday’s win over Manchester City would have filled Saints with confidence, but Everton should have enough to extend their impressive home form. We’re going with a 2-1 home win.

Southampton have scored six goals in two away games since the restart, so you’d expect to see them testing Jordan Pickford this evening. Che Adams justifiably stole the headlines with his excellent long range finish against Manchester City at the weekend, but Danny Ings will be keen to get back amongst the goals to fuel his bid for the Premier League top goalscorer crown. The former Liverpool forward has scored whenever he has worn a Saints strip at Goodison Park, with three goals in four games against the Toffees in total as a Southampton player. The 4/1 on offer for Ings to open the scoring looks a decent punt.

Here's our betting preview ahead of this weekend's Bundesliga action, the 30th gameweek of the season...

Bournemouth have lost all four of their games since the Premier League’s restart. Tonight, they’ll bid to become the first team in the relegation zone to win a home match against a side managed by Jose Mourinho, when Tottenham Hotspur arrive at the Vitality Stadium.

Talking about the Premier League, the final round and bets available!

The bad news is the Premier League comes to an end this weekend. The good…